Rammed earth uses a mixture of clay and sandy soil mixed with water and then compacted within formwork to form a monolithic earth wall. Earth is compacted between the formwork in layers until the formwork is filled. The forms are then moved to another location so that another section of wall can be constructed. Rammed earth has recently become popular as a sustainable building material.

Soil is taken from the ground and if necessary sieved to remove larger particles. Additives such as straw or lime may be mixed into the soil, which is then dropped into the formwork in layers, usually around 150mm high. The layer is then compacted using a heavy rammer. Upon compaction of one layer, another layer of earth is placed in the formwork and the process repeated until the formwork is full.

The formwork is then removed and placed on the next set of horizontal timbers where the process is repeated. Once the formwork has been moved on, the horizontal timbers are removed from the wall leaving characteristic holes. Upon completion of one horizontal level the formwork is moved vertically, the mass of standing wall being known as a lift. A rammed earth wall can thus be constructed using very little manpower and crucially without recourse to temporary works such as external scaffolding. 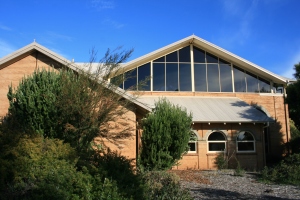 Traditional rammed earth formwork is usually made from timber, and is supported on timbers running through the wall. The formwork is moved along the length of the wall and then vertically, so that when one formwork box is filled with earth, it can be dismantled and moved to allow further compaction to take place. Modern formwork is similar to that used for concrete, and may be modular, allowing for large sections to be built in one go.

Modern rammed earth tends to use pneumatic or electric hammers fitted with flat feet to provide compaction, whereas traditional rammers tend to be timber poles with shaped ends, or sometimes incorporating stones at the end of the rammer. When the formwork box is filled, it is removed and moved to another location, giving rise to characteristic ‘lifts’ in rammed earth construction. In some rammed earth traditions the formwork is supported on timbers placed on the wall, and these leave characteristic holes denoting the position of each lift.